EXCLUSIVELY IN THE TRIJICON TA31 ACOG

In 2016 We teamed up with Trijicon to bring you the revered ACOG prism scope combined with our Advanced Combat Sighting System (ACSS). Just three years later we are doing it again, only this time we developed a new reticle designed specifically for use in the ACOG. Our new ACSS Aurora reticle has been modified to align with the philosophy of use that Trijicon set forth to accomplish with the ACOG. We believe the ACSS Aurora reticle is the icing on the cake that fully realizes the idea of an optic that increases first hit ratio whether at 800 meters or CQB distances. Let us tell you why:

WHY THE TRIJICON ACOG

The Trijicon ACOG is a scope that requires no introduction. It is known for exceptional durability and optical clarity and has been a trusted optic for United States soldiers since 1993. 23 years later and this prism scope is still going strong in both the commercial and military markets with only one thing holding it back: the reticle. 23 years after the release of the ACOG and the reticle needed an update to accommodate for the changing dynamic of how soldiers use their rifles. With updated functionality like BDC calculated in 50-meter increments and holds for engaging fast moving targets, this reticle is a perfect match for the ACOG’s purpose-built use cases. 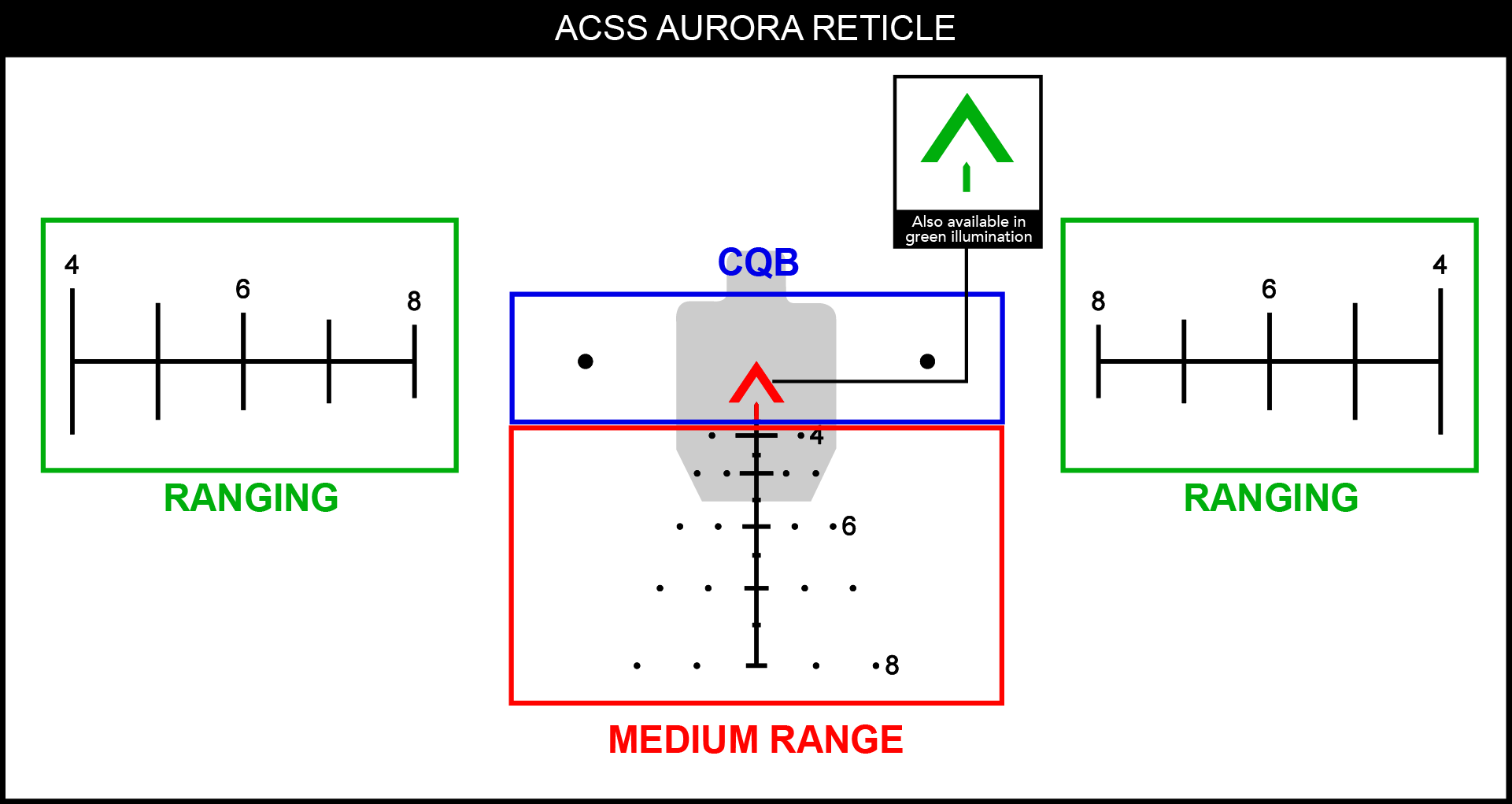 WHY THE ACSS AURORA IS THE PERFECT MATCH FOR THE ACOG

While the Aurora may look like the original ACSS reticle, the windage holds and bullet drop compensation are calculated in meters instead of yards. The United States Military and police forces around the world train operators to range and engage targets using meters, so we designed a reticle that is familiar and intuitive for many of you. The BDC also utilizes 50-meter increments for even finer range estimation capabilities than ever before, all while still being extremely fast and easy to use. We’ve even built in the ability to range targets that are partially obscured. With only brief windows of presentation, knowing how far away the target is results in not only more effective fire but the ability to more accurately deploy additional assets as needed. 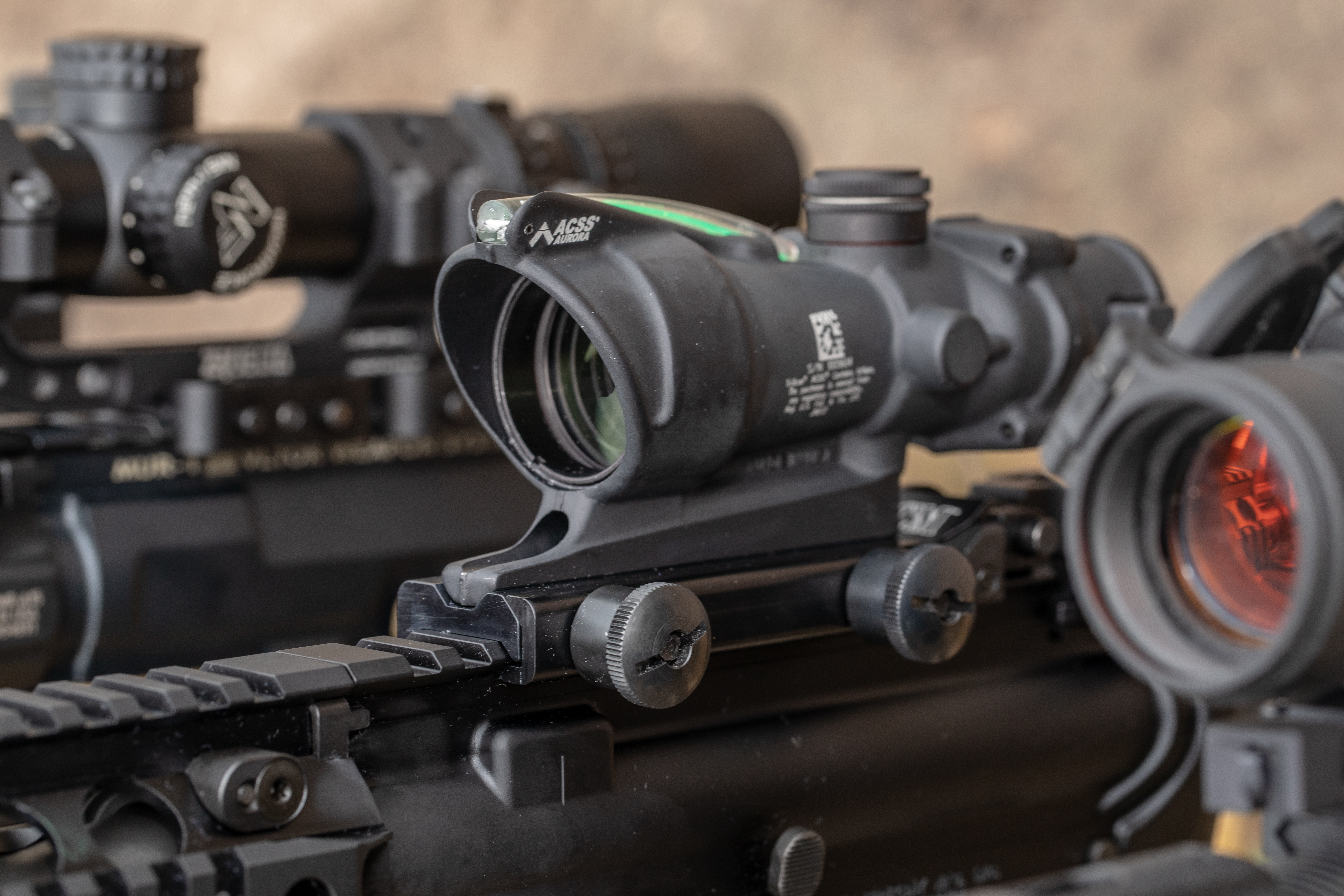 Additionally, the new ranging bars located to the sides of the chevron tip reticle can be used as moving target leads. This feature is available on other ACSS reticles, but the difference that sets Aurora apart is the ability to lead targets moving up to 40mph – a feature that is increasingly important for soldiers – utilizing horizontal ranging bars that extend from each side of the chevron tip. The Aurora ACSS reticle is the first Primary Arms reticle designed specifically for military use, so combining it with the TA31 4×32 ACOG was the obvious choice.

The ACOG’s durability and optical clarity are legendary, and they’ve been a trusted optic for our soldiers for decades. In 2016, Trijicon recognized the utility and capability of our Advanced Combined Sighting System (ACSS) reticle, making it the first 3rd party reticle commercially available in a factory Trijicon optic. We are very proud of that fact and set our team to work on something even better. Now for 2019, we have once again teamed up with Trijicon to bring the ACSS Aurora to the table. Designed from the ground up to wring every bit of performance out of these top-tier combat optics, the ACSS Aurora readily increases first hit probability and decreases time on target dramatically. For the latest and greatest combination of military grade optics and smart reticle design, look no further than TA31 4x ACOG combined with the Primary Arms ACSS Aurora reticle.

THE SMARTEST COMBAT RETICLE SYSTEM IN THE WORLD

While many reticles found in an ACOG include some capability to range targets and have some form of integrated BDC, none are equipped with the full set of features or the remarkable ease of use that come along with the ACSS Aurora. We’ve painstakingly developed and engineered this reticle and optic combat system to bring the toughest, most feature-rich performance to the people that demand it the most.